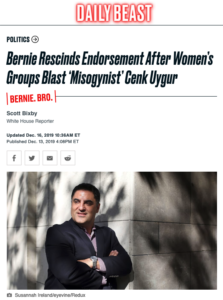 California Women’s List is a political organization dedicated to electing women who will make California more just and equitable for all. Tuple Legal is proud to count them as a client.

During the 2020 Democratic Primary, California Women’s List was particularly taken aback when Bernie Sanders endorsed a candidate with a history of “long history of ugly comments about women”, as the Daily Beast reported.

The pro-woman PAC put Bernie on blast, and he was forced to retract the endorsement:

When Sen. Bernie Sanders endorsed Cenk Uygur, the co-founder of left-wing video site The Young Turks and the Platonic ideal of a Bernie Bro, in the packed race to replace former Rep. Katie Hill in Congress, he presumably didn’t expect that the endorsement would be criticized, disavowed, and finally retracted within the course of a single day.

“California Women’s List is disappointed in Senator Sanders’ endorsement of Cenk Uygur, a candidate who has repeatedly used misogynistic, racist, and homophobic language,” Emily Zahn, board president of California Women’s List, which fundraises for female Democratic candidates across the state, told The Daily Beast. “This endorsement appears to go against Senator Sanders’ platform and role as a leader in the progressive movement.”

“If Bernie Sanders is a real progressive—he will disavow Cenk Uygur immediately,” the National Organization for Women’s Hollywood chapter told The Daily Beast in a statement, calling Uygur’s past comments about women “both disturbing and disqualifying.”

“If Bernie Sanders expects to get the support of women in his campaign for the White House in 2020, he needs to start prioritizing them in his race by taking back his endorsement of known misogynist Cenk Uygur.”

You can also start your political organization, and Tuple Legal can help. Send a note today for more information.