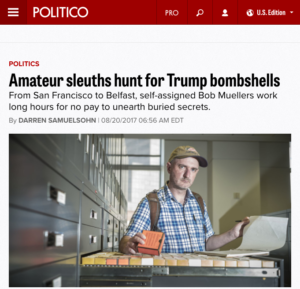 Nearly 3,000 miles from special counsel Robert Mueller’s Washington offices, another investigation into President Donald Trump is underway. This one unfolds in the public libraries and coffee shops of San Francisco, where a self-employed 40-year-old named Geoff Andersen has worked since November … in pursuit of hidden truths about Trump’s rise to power.

“They had to find the key,” Andersen chuckled.

After the story broke, Geoff gave Tuple a kind shout-out:

Ryan was a godsend when we were trying to figure out how to set up a nonprofit for our supporters. I can't praise him enough for his support

You can also start your resistance to Trump, and Tuple Legal can help. Send a note today for more information.