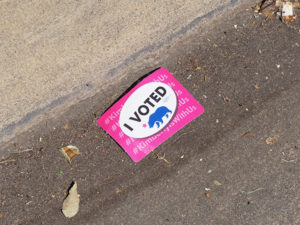 Campaign finance disclosure is a cornerstone of a functioning democracy. It lets voters know how candidates raise funds for their election, and how they spend that money. Virtually all political organizations must file public disclosures–including candidates for Chair of the California Democratic Party. Kimberly Ellis failed to make any required disclosures for nearly two years, in violation of federal tax law.

Read on for: 1) specifics of Ellis’s violation of the law, 2) what Ellis was required to disclose, 3) the problem with not disclosing, and 4) what you can do to report her violation to IRS regulators.

In order to receive contributions and not pay income tax on them, an organization must establish tax-exempt status. Kimberly Ellis did that in 2015, when she registered her campaign as a 527 political organization:1

Having tax-exempt status comes with public disclosure requirements. A 527 organization that “accepts a contribution, or makes an expenditure, for an exempt function” must regularly file campaign reports with the IRS.2 3

Kimberly Ellis’ campaign organization was of course created to influence the election of the CDP Chair’s race, which is the office of a political organization. She was therefore required to file reports pursuant to the Internal Revenue Code.

As of this writing, Ellis has not filed any of the required Form 8872 reports in the almost two years since she filed for 527 status–despite her legal obligation to do so:6 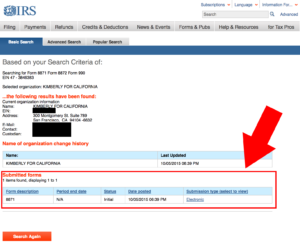 Ellis claimed repeatedly during the campaign that she was not required to file Form 8872,7 8 but that is plainly untrue.

For his part, Eric Bauman did file Form 8872 reports for his committee, as required by law.9

What Did Kimberly Ellis Publicly Disclose, and What Was She Required to Disclose?

Despite this violation of law, the Ellis campaign touted its supposed commitment to transparency by releasing the names of their donors on their campaign website.10 Putting aside for a moment that Ellis’ “disclosure” was through her own website and not through a regulatory body, it falls woefully short of what is required by law.

Take a look at what Ellis disclosed and what she was required to disclose by law on Form 8872:

What Ellis Did Not Disclose

Get Better, Confidential Research for Your Clients

What Is the Potential Harm In Kimberly Ellis Not Disclosing?

The first reason for public disclosure is that it allows the public to know who stands behind a nonprofit organization. For example, the public has no idea how much Quinn Delaney contributed to Ellis, and Quinn Delaney’s personal fortune comes from Bay Area real estate development.11 Similarly, the public has no idea how much money Ellis took from Freada Kapor Klein, whose largesse comes from Silicon Valley venture capital investments.12 Without public disclosure, we’ll never know much corporate influence there actually was over the Ellis campaign. All we know from Ellis’ website is that these very wealthy, corporate individuals contributed over $1,000.

The second reason for public disclosure is that it’s a check on those who would abuse tax-exempt status. Ellis had a half a million dollars at her disposal in this campaign.13 Without publicly disclosing the required information above, the public has no idea how Ellis spent that money. The public simply cannot answer questions like:

We’ll never be able to answer these questions until she files the reports she was required to by law.

What Can You Do?

Luckily, the IRS has a mechanism to report tax law violations. You can fill out and email Form 13909 to eoclass@irs.gov.

Ryan Hughes is a political researcher and nonprofit law attorney. Contact him here.